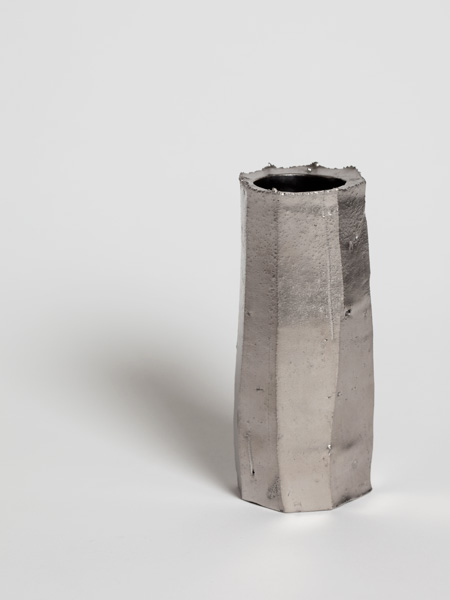 this vase has been wheel thrown from a very short clay
(containing a high amount of quartz) and faceted
with a wire before becoming leather hard.
this particular type of clay has been in use
since the kingdom of Noricum,
even before the Roman empire ruled Austria.
the deposit is now in the province of Burgenland,
but had fallen into neglect.
I revived it, digging the clay and refining it at my studio.
the clay contains a lot of iron ore that was also used
since the iron age because it is particularly easy to mine
at this site. iron tools and weapons made from it were
exported as far as Italy.
I use the clay in totally unaltered state, extracting only large
size iron ore lumps and adding nothing at all.
the vase has been fired three times.
first there is a bisque firing at 950°C and
subsequently a glaze is applied and it is fired a second
time, at 1250°C.
the glaze I used here has a feldspar/reed ash/wood ash base
and contains a high percentage of metallic oxides,
giving it a surface that is matt or glossy, depending on
the thickness of application, and has a wrinkled texture.
then a platinum overglaze is applied with a small brush.
it contains the actual precious metal.
finally the piece is fired for a third time, at 750°C.
overview/previous/next